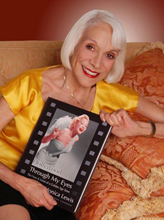 Monica with her memoir: Hollywood Through My Eyes 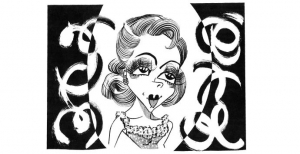 Monica Lewis passed away on June 12, 2015. Those who grew up in the 1940s and 1950s will probably remember her beautiful voice on countless radio shows but, to many, her name is not familiar. However, millions will remember her as the voice of Miss Chiquita Banana.
Monica was born in Chicago on May 5, 1922, with the dark clouds of the Great Depression looming on the horizon. Her father, Leon, was an accomplished composer and conductor; Monica’s mother Jessica sang with the Chicago Opera Company. When both parents lost their jobs during the Depression, the family of five moved to New York City. It was there that Monica launched her very successful singing career which included headlining the first “Ed Sullivan Show” and working with Benny Goodman.
Monica moved to Hollywood in the early 1950s where she met and married Jennings Lang, producer of blockbuster films including “Airport” and “Earthquake.” Together they raised three sons and lived in a Beverly Hills mansion large enough to accommodate hundreds of guests at their frequent parties. During those Golden Years in Hollywood, most of Hollywood’s rich and famous found their way to the Lang mansion as did other famous guests, such as the Kennedys and the Beatles.
I had the rare privilege of publishing Monica Lewis’s memoirs, Hollywood through My Eyes, and will never forget the many fun months we had in bringing it into print along with her co-author Dean Lamanna, historian Flint Whitlock, and cover designer Norm Dodge. I will admit to being more than slightly intimidated at first to be working with a legend, but she greeted me in our first conversation with, “Hello, Darling. How are you?” I immediately knew that I had found a new friend.
She was an icon who will never be forgotten, and her death came as a shock to me – I had considered her ageless. Monica brought joy and vitality wherever she happened to be. Even in the last few years, when she lived at what she described as “The Retirement Home for Movie Stars,” she remained active. One of our conversations was cut short because she had to help decorate the common areas for Christmas. At another time, she had to go to her ballet class (this when she was in her ninties)!
After her passing, Monica’s son Rocky posted the following on Facebook: “ …My mom joined my father in the early morning hours peacefully and in her bed. The beauty of her passing was that she was able to discuss her life with her granddaughters and her hopes for their lives… She told them to love deeply, give of themselves, and never feel sorry for her. She was content where she was….”
Monica had 10,000 followers on Facebook and thousands more on Twitter, and she stayed busy answering every one of them. One British fan recently bought Hollywood through My Eyes, then wrote and asked if I would forward a letter she’d written to Monica. She recently sent an email saying, “I am so, so sad. I just read that she has died. I loved her so much. RIP.” Those same thoughts are echoed from all corners of the world.