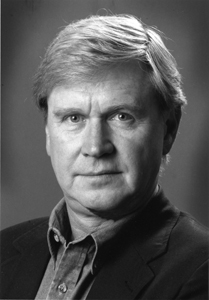 In the summer of 2006, a query to agents and publishers landed on my desk. Historian Flint Whitlock of Denver (www.flintwhitlock.com) sent the query blast, looking for anyone who might be interested in his upcoming book, Capt. Jepp and the Little Black Book. I answered immediately, but I didn’t know then that my life was about to take a very interesting turn. There were about 40 publishers and agents who responded to Flint’s query, and I was fortunate enough to bring Capt. Jepp into print the following January – just in time for Elrey Jeppesen’s 100th birthday celebration at Denver International’s Jeppesen Terminal.
As our Capt. Jepp project progressed, emails to “Mr. Whitlock” and “Ms. Wisherd” were soon addressed to “Flint” and “Nan,” and I was very impressed by Flint’s depth of knowledge and detailed research on his subject. Elrey Jeppesen’s rags-to-riches story includes the early days of flying, with barnstormers and wing-walkers, and relates how – after nearly dying in a plane crash – Elrey turned notes in a ten-cent notebook into a multi-billion company, the Jeppesen Corporation.
Flint switched gears a bit, and our next project, Turbulence before Takeoff, was the story of Marlon Green, the first African American to be hired by a commercial airline. Again, Flint’s knowledge on an entirely different subject was awesome.
Then came Flint’s first novel, Internal Conflicts, and his prowess as a powerful writer careened in yet another fascinating direction – the Vietnam Era.
Our most problematic project thus far has been Survivor of Buchenwald: My Personal Odyssey through Hell. Flint co-authored this book with Louis Gros, a Frenchman who was incarcerated in the Buchenwald Concentration Camp for distributing anti-Nazi pamphlets. It was several years of letters, documents, and photographs crossing the Atlantic before Survivor was finally published early in 2012. Mr. Gros had learned to read and write English while incarcerated in Buchenwald but could not speak English! He also had no computer, so good old-fashioned trans-Atlantic snail mail was our only way of communicating.
Survivor of Buchenwald is the second book of Flint’s Buchenwald Trilogy. The first book, The Beasts of Buchenwald: Karl & Ilse Koch, Human-skin Lampshades, and the War-crimes Trial of the Century, is Cable’s bestselling title in both traditional and ebook formats. The final book, Buchenwald, Hell on a Hilltop: Murder, Torture & Medical Experiments in the Nazis’ Worst Concentration Camp, was released in 2013.
Flint’s books have won many awards. Capt. Jepp, Turbulence before Takeoff, and The Beasts of Buchenwald have all been Colorado Book Award finalists. Internal Conflicts won a 2010 gold medal from the Military Writer’s Society of America and received honorable mention in 2011 from “Stars & Flags.” The Beasts of Buchenwald won first place in 2011 from “Stars & Flags” and was a 2012 finalist at the Midwest Book Awards.
Because of his expertise as a World War II historian, working with Flint on history-related titles like Marty Daneman’s Do Well or Die: Memoirs of a WWII Mountain Trooper or Bernard Kahn’s Fight On: A GI’s Odyssey Back to Nazi Germany is both an honor and learning experience. Because of his many experiences during his working career, Flint is truly a one-stop shop with book projects. Whether it is researching, editing, graphic design, or just an opinion needed, Flint has turned many grueling projects into fun adventures that always end with another beautiful book added to Cable’s growing collection.
I will always be grateful to Flint for choosing me as Capt. Jepp’s publisher so many years ago.