– Nan Wisherd, read by Jackie Boor during Memorial services for Col. Boyer at the Nixon Library on Friday, September 9. Services begin at 10 AM

I felt very honored to work with LTC Boyer and Jackie Boor and bring Inside the Presidents Helicopter into print. LTC Boyer was a passionate American patriot who always went above and beyond the call of duty when asked. He was a tenacious fighter who never gave up battling for the causes he believed in. And he is a pillar in American history, an icon who should never be forgotten.
His life stories are numerous, amazing, and often death-defying. I won’t forget when he flew his commanding officer into the […]

Is Olaf Danielson a “wing nut?” Or does he just have a “fowl obsession?” Well, perhaps both are true… Olaf is a very serious birder and, in July, achieved what was previously believed to be the impossible. As a fellow birder (aka wing nut), I am thrilled by Olaf’s accomplishment and look forward to seeing how far his record-breaking numbers soar at the end of his Big Year on December 31.

When Sandy Komito (the cheery guy played by Owen Wilson in the movie The Big Year) saw 748 species in 1998, many thought his North American birding record would last forever. In fact, Komito’s number stood for […] 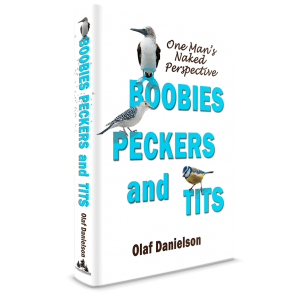 A few years ago, Olaf Danielson lay for several agonizing, frustrating days in a hospital bed – unmoving and with eyes closed – suffering from a severe vertigo attack. With plenty of time to think, he vowed that, if he could resume a normal life, he would fulfill the last item on the bucket list that he had written as a teen. And he had plenty of time to plan how he would accomplish that goal: to be a world record holder.
Boobies, Peckers and Tits: One Man’s Naked Perspective documents Olaf’s epic quest, which combined seeing as many species of birds In one year…while he was nude. […]